Del Rèbene and the ancient Cimbro path, heritage of the Berici Hills

A company of wine and oil, with ancient origins, of rigorous biological conviction, where the territory and the products speak for themselves.

This is a concept that the territory on which the Del Rèbene farm stands, testifies very well: a company now complete thanks to the production of oil, wine and a suggestive hospitality area.

To find out more about this small reality in the Vicenza area, we chatted with Francesco, the proud guardian of a land with ancient origins.

In 1990, entering an impervious path, on the edge of the back road of the Berici Hills, Francesco identifies the ruins of a district of 1500, abandoned after the Second World War: the ruins of the village were visible on a hill, an ancient volcanic chimney that dominates the Valle Del Gazzo, now protected as the natural and scenic beauty of Italy.

Although uncultivated for decades, the area appeared particularly suited to the vine.

An ancient map named the road that leads to this “Rebene” hillock from “Reben” which meant “vine, vineyard” in the ancient Cimbra language spoken in these hills from 1300 to 1500, and still has this meaning in German. 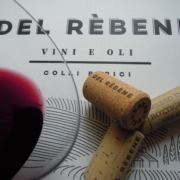