The origins of Del Rèbene

Del Rèbene winery was born from the ruins of a 15th-century village, abandoned after the Second World War, lying on an open hill created by an ancient volcanic chimney overlooking the Gazzo Valley, included in the list of Italian Landscape Beauties.

An ancient map named the road leading to this knoll “del Rebene”, that is “vine, vineyard” in the ancient Cimbra language, spoken in these hills from 1300 to 1500: this is the proof that the vineyard was cultivated here since the late Middle Ages. 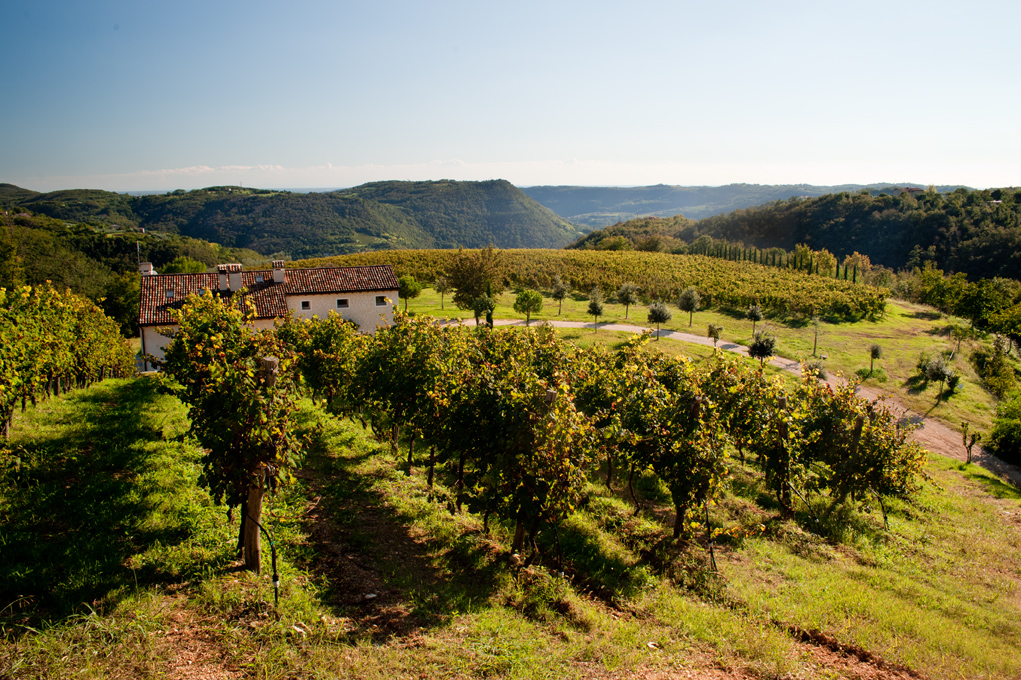 In the thirteenth century the emperor of the Holy Roman Empire granted the Bishop of Vicenza to collect tributes on the Berici Hills, at that time uncultivated.

The Bishop divided the territory into ” Masi” (kind of farm), each one extended from 25 to 50 fields and assigned them to settlers, almost exclusively German, considered to be the best at tilling the uncultivated.

One of these “Masi” lies on top of a hill created by an ancient volcanic chimney at 300 meters high. This open hill stands isolated on the plain of the Gazzo Valley.

Its top and its steep slopes are mostly cultivated with vines, with a little olive, cherry and vegetables. A lucky plot kissed by the sun and served by waters from the nearby Fontana del Monte.
In the Berici Hills, between the end of 1200 and 1500 German is spoken and this “Maso” is called “Rébene” which means vineyard.

In 1672 the fund appears in the will of the noble Francesco Sorio San Giorgio and is counted among its assets which he confers to provide four dotal graces each year to “virgin citizens of honest life, belonging to a noble or distinguished civil condition, born of legitimate marriage, who for claims of their families are in need of being equipped ″ to be the dowry to five girls of a good family who need it every year ”.

In the following centuries the original housing nucleus expands to become a district consisting of three farmhouses side by side, with a stable and a bread oven.

During the last world war, the district is still inhabited by about thirty people. Unfortunately, at the end of the war, the district, too isolated, was not reached by the electricity that has now spread over all the hills and, in the early 1950s, its inhabitants left it to emigrate to the city.
Rebene remained abandoned.

The recovery of Del Rèbene

In 1990 a local young man leads Francesco to the land, walking through a narrow path, invaded by brambles and a blanket of almost impenetrable vegetation.

The ancient district is hidden under a dense cover of ivy, brambles and vitalbe, without roof and invaded by vegetation inside.

The vines still married to the old country maples and ash trees (Opi and Orni) are now overwhelmed by brambles and vitalbe.

The once delightful terraces of vegetable gardens cultivated by the laborious hand of man are now the undisputed domain of brambles and wild shrubs.

But still the clear sky dominated by a generous sun, the throbbing energy, the beauty and magic of this place convince Francesco to undertake a work of which, for his young age, he does not imagine the commitment: to bring Rebene back to his ancient vocation, to the cultivation of vines and olives, to life.

This work should never forget the long historical memory of the place and the profound respect for such a benign nature. 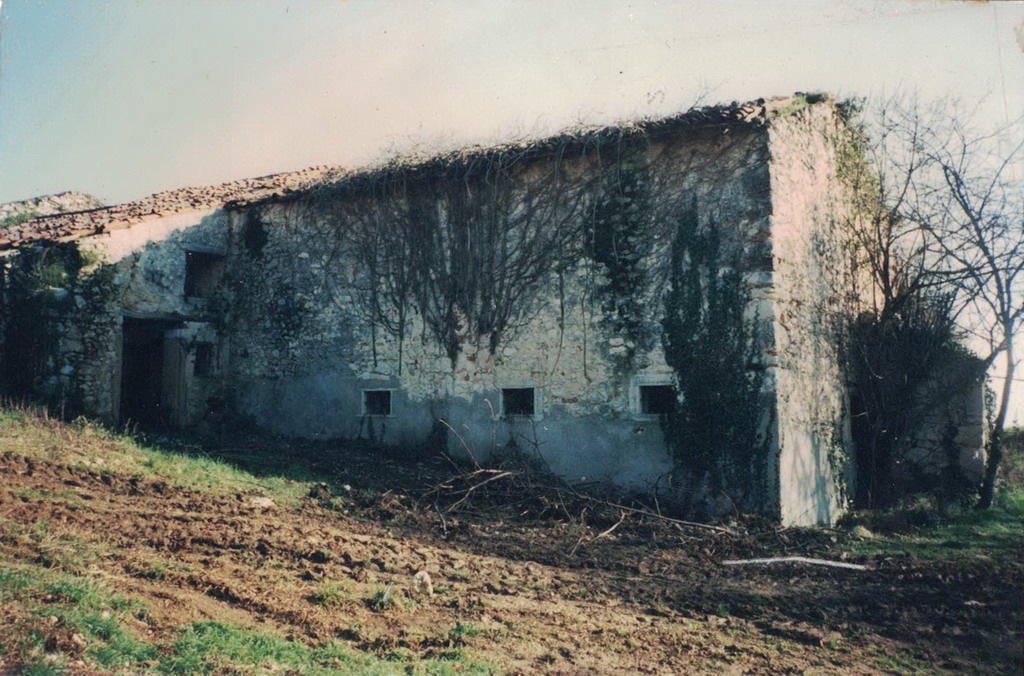 On these slopes Francesco is bringing the autochthonous vines Carmenére and Tai Rosso to their maximum expression, accompanying them to the international Cabernet Franc and Cabernet Sauvignon.

The vineyard, extended for five hectares, has found here the ideal environment to produce a grape that does not require major human intervention, thanks also to the calcareous-marine soil and the climate characterized by temperature excursions favored by the altitude and also dry and breezy, comparable to the Mediterranean scrub.

The processing in the vineyard is organic and biodynamic and allows the grapes to fully mature and produce high quality wines.

Even the olive trees have firm origins on these lands: the first findings on the cadastral estimates date back to 1700.

Since the 1990s, Francesco has started a passionate recovery of a steep slope, harnessed by centuries-old stone terraces, on which he has replanted 3 hectares of olive trees of indigenous varieties such as Rasara together with Leccino, Coratina and Pendolino.

The freshly picked olives are crushed in the nearest oil mill

Organic and Biodynamic according to Del Rèbene

The winery has always adopted methods of cultivation and transformation of natural and organic products and since 2006 has requested and obtained the certification of the law.

Vineyards and olive groves are entirely surrounded by ancient deciduous forests that protect them from sources of contamination from other crops.

The winery consists of a central body obtained from the least steep and most fertile part around the ancient village, cultivated with vines and olive trees.

This plot of approximately 8 hectares in total is entirely surrounded by deciduous forests. The closest crops are more than a kilometer away.

In addition, thanks to the presence of the deep Gazzo Valley, the entire bottom enjoys the morning and evening breeze. All these elements, combined with a happy southern exposure, make the ideal environment for organic cultivation.

The olive tree is grown in a polyconic pot served with emergency drop irrigation: it produces about 40/50 quintals per hectare.

The vines cultivated in espalier guyot, with a density of 4,000 / 4,500 vines per hectare with a production of about 50 quintals per hectare. 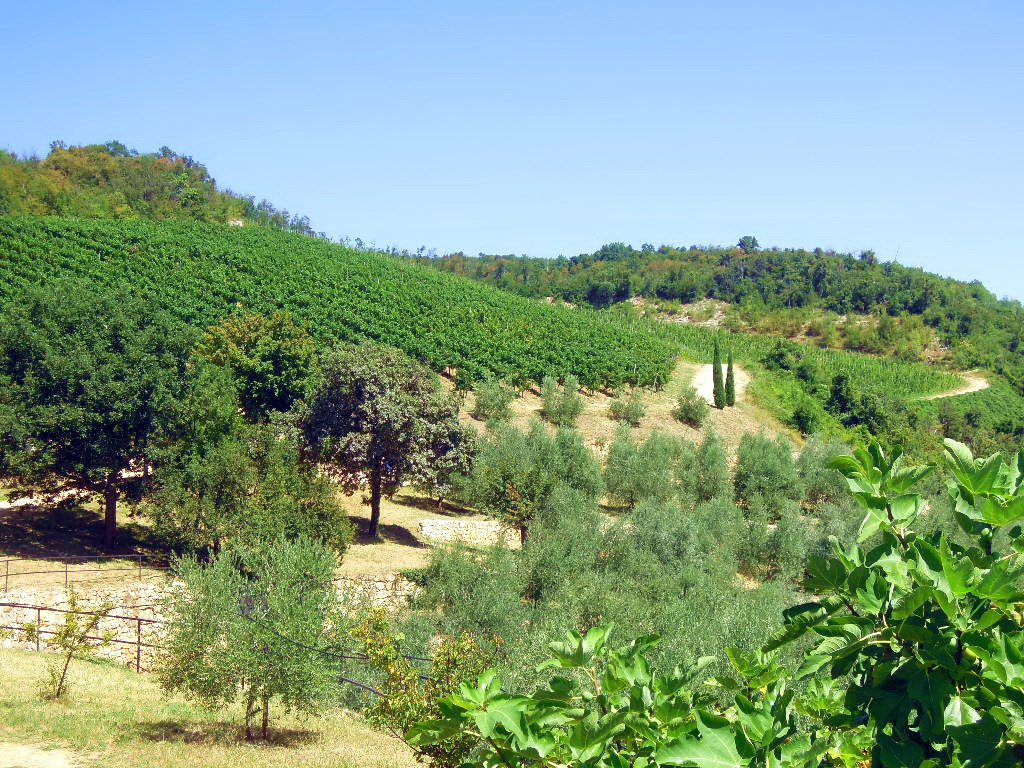 The Berici Hills are located south of Vicenza. They originated about 60 million years ago following an ancient bradyseism, that is the lifting of the seabed by the pressure of the magma present in the subsoil.

The southern slope of the Berici Hills is characterized by the Mediterranean microclimate.
The soil of the Del Rèbene company is very steep and facing south, the clayey soil of limestone matrix and the emergency drop irrigation, give very thick skinned grapes, rich in tannins and anthocyanins.

The Carmenère, Tai red and Cabernet Sauvignon grapes reach full maturity and the aromas evolve into an elegant spicy, thanks also to a high temperature range of the site, located at about 300 meters above sea level.

A spectacular top view of our company, made with a drone.